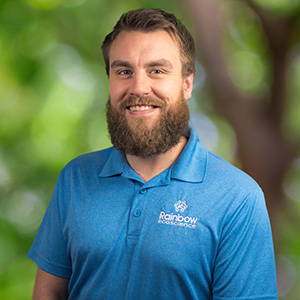 Erik Lindberg, Lead Technical Advisor, provides education and training to Rainbow’s clients. He also works with the research and development department in conducting trials, analyzing data, and writing research reports. Erik received his bachelors from the University of Wisconsin - Eau Claire majoring in Ecology and Environmental Biology with a chemistry minor. He has a M.S. in Biology with an emphasis in forest ecology from Texas Tech University. He is a licensed pesticide applicator in Minnesota and previously worked as a plant healthcare technician for Rainbow. He has also worked in the herbarium at the Charles Darwin Research Station in the Galapagos Islands. He is an avid runner, having completed 7 marathons (including the Boston marathon), 6 half marathons, and countless 10k and 5k races. His favorite tree is the ginkgo tree (Ginkgo biloba) because it is the only remaining species within its division, and fossils of it have been dated back to 270 million years ago. If he were hosting a dinner party and could invite any 3 guests he would choose Jack London, Maynard James Keenan, and Aldo Leopold.