Native to Europe, the birch leafminer, Fenusa pusilla, first appeared in Connecticut in 1923. This pest is known to feed on most species of birch trees, although susceptibility varies. The birch leafminer feeds on the tissue between the upper and lower surfaces of newly emerging leaves producing large dead blotches and eventual leaf loss. Severe infestations can lead to damage of nearly every leaf by mid-summer. Continued leaf loss year after year can lead to a weakened tree, decline, and greater susceptibility to secondary insect and disease pests including bronze birch borer.

First generation feeding by birch leafminer larvae occurs early in the growing season. Proper application timing is essential for optimal management of this insect. Soil applications of Xytect should be applied in late summer or early fall in the previous year to ensure the Xytect has ample time to translocate within the crown in sufficient titers to control the larvae. Xytect 10% as a tree injection treatment for trees that cannot be treated with foliar sprays or other systemic options can be applied in early spring. Early spring Transtect soil applications will provide acceptable same season control if they are properly timed.

Early symptoms of birch leafminer include small serpentine mines on new leaves in the spring of the year. These mines eventually overlap and appear as blistered, translucent blotches. Entire leaves can turn completely brown and paper-like by mid-summer and fall off. Normally, damaged leaves are scattered throughout the tree. Eventually the entire tree can look scorched or blighted. 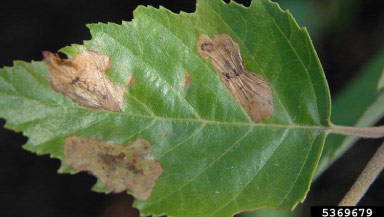 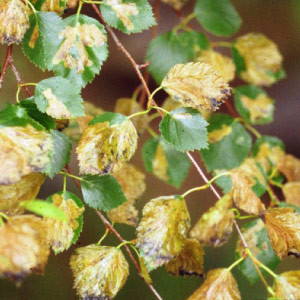 Birch leafminer feeds in the leaves of most birches including: