Dutch elm disease (DED) is a fatal disease of elm (Ulmus sp.) caused by the fungus Ophiostoma novo-ulmi. Introduced to the United States in the 1930’s, the disease has killed millions of elm trees and remains a key focus for urban foresters throughout the country. The fungus can be spread by root graft transmission but is most commonly vectored from diseased trees to healthy trees by the European elm bark beetle and the native elm bark beetle.

Arbotect protects elm trees for 3 growing seasons from Dutch elm disease using the Rainbow macro-infusion system. Arbotect DOES NOT protect Elms from root graft infections and Arbotect DOES NOT SAVE DISEASED elms without pruning out the infection. Dutch Elm Disease spreads overland by Elm Bark Beetles and below ground by root grafts. The elm bark beetle feeds in the 2 -4 year old branches of healthy elms. If the beetle is carrying the disease spores on its body, it introduces the fungus at that time. Thus, the purpose of Arbotect macro infusion is to evenly and completely cover all the 2 -4 year old branches with enough fungicide to keep the fungus from being able to grow. Arbotect is diluted and macro-infused with high volumes of water to ensure complete and even distribution of the fungicide in the crown of each tree. 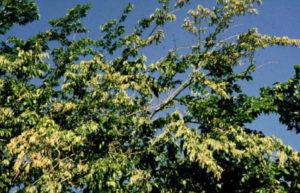 Wilting or "flagging" in the canopy 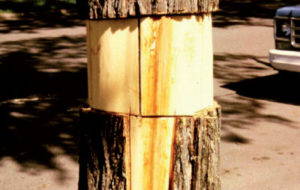 *denotes those most susceptible

A Treatment Guide is designed to help you identify a pest issue and management solutions. Always refer to product label for all rates and approved uses. Some images courtesy of forestryimages.org or Wikimedia Commons. Use of the images does not imply endorsement of treatments by forestryimages.org