Gloomy scale (an armored scale) is primarily a pest of red maples but has been observed feeding on other tree species including sugar maple, elm, tulip poplar, hackberry, boxelder, buckthorn, sweet gum, mulberry, native hollies, and soapberry. Gloomy scale is found throughout the southeastern United States as far north as Maryland, south to Florida, and west to Texas. They are more abundant on trees in cities than in natural areas. Adult female covers, called tests, are up to 2 millimeters wide with a central pale ring. The test is convex and can be grey to brown and blends in with the bark. Beneath the test the soft-bodied scale insect is pink, legless, and wingless. Males are smaller, have an oval shaped armored covering, and develop legs and wings as an adult. The nymphs, called crawlers, are less than 1mm and orange. The young female nymphs resemble adults but have significantly smaller bodies and armor.

Gloomy Scale is very difficult to manage after the populations have established. Early detection is critical for best management of infested trees. Monitor three to four year old twigs for the gray protective covers of this armored scale insect. Heavily infested branches should be pruned and destroyed.

Trials performed in 2015 demonstrated excellent results with Transtect as a soil or bark spray. If the tree has been heavily infested with severe decline multiple growing seasons may be needed for tree to recover fully. It is suggested to treat trees annually after heavy infestations. 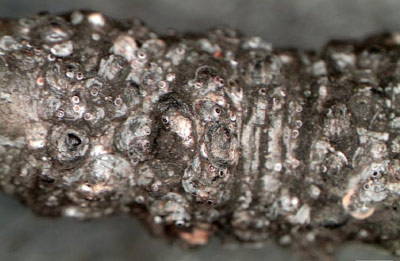 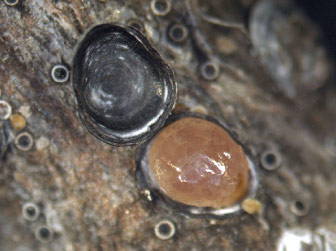