Ganoderma butt rot (Ganoderma zonatum) is a lethal disease of palms. Symptoms may include wilting and/or general decline. The disease often forms a conk, called a basidiocarp, on the trunk. However, many diseased palms do not produce conks prior to death. Ganoderma is a white rot fungus that begins be degrading lignin followed by cellulose. Degrading internal lignin and cellulose within the palm affects water conducting parts of the plant, and predisposes the palm to trunk failure.

This disease affects healthy trees in diverse environments. There is no known control. Remove, bag, and dispose of conks to reduce amount of spore production. Preventatively remove palms displaying conks as they pose a risk of failure. 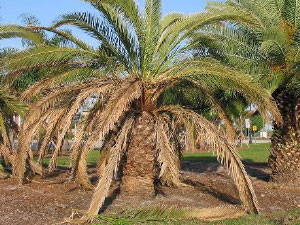 Photo: Sabal palm with wilted and desiccated leaves due to Ganoderma zonatum infection. 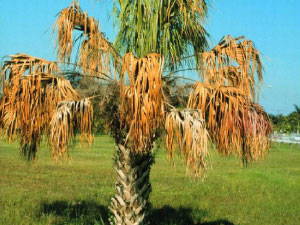 At least 65 species of palms.