The Polyphagous Shot Hole Borer, Euwallacea sp., is a boring beetle from the same family as bark and ambrosia beetles. PSHB is a non-native species originating from South East Asia, and was identified in2003 in Los Angeles County. Over 130 species of tree are susceptible to attack from PSHB, but the severity of injury can vary from single branch dieback to entire tree death. However, the PSHB can complete its life cycle in only about 20 tree species. Trees are not killed directly by the boring of the beetle, but by the symbiotic fungus the beetle carries with it, Fusarium euwallaceae. The fungus clogs the conductive tissues of the tree cutting off the flow of water and nutrients to the tree.

Treatment can be tricky since the PSHB does not directly feed on the tree; rather, it feeds on the fungus grown in the galleries. This makes systemic insecticides ineffective and the results unreliable. Bark sprays have been seen to have the best results teamed with a fungicide to control already infected trees, or in preventing attacks on trees. 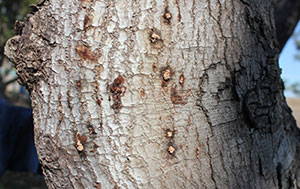 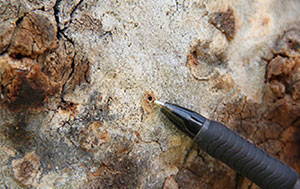 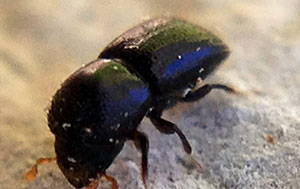 A Treatment Guide is designed to help you identify a pest issue and management solutions. Always refer to product label for all rates and approved uses. Some images courtesy of forestryimages.org or Wikimedia Commons. Use of the images does not imply endorsement of treatments by forestryimages.org